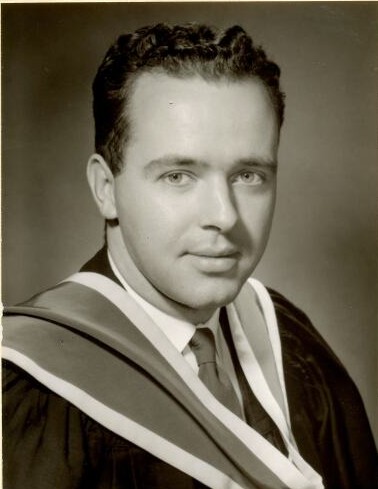 At home on March 11, 2021. Predeceased by his cherished wife Marion (nee Boyce) of 57 years. He will be greatly missed by his children Robert, William and Jane (David), and grandson, Joseph. Born in Ottawa and raised in the Glebe by his widowed, school teacher mother, Margaret, and brother John (deceased), Dad went on to graduate from Medicine at Queen’s University in 1954. At Queen’s, he met our mother (a student at the KGH School of Nursing) in his first year, fell in love and married her the day before receiving his degree. They were never apart, devoted to one another and their family. After interning at Vancouver General Hospital, Dad and Mom moved to Cobourg, Ontario where Dad set up a general practice out of their home as well as the Grafton Hotel. In 1956, the family moved to Kingston, where Dad worked as school medical officer for the Kingston Department of Health for a year before deciding to complete his psychiatry residency at the University of Toronto, graduating in 1960. The family returned to Kingston, where Dad practiced psychiatry until his retirement in 1994. As a child, Dad made frequent visits to Middleville, Lanark Township, to stay with his great Aunt Clara Croft, where he would help with the chores, and one summer worked on the farm of Bill Croft, Aunt Clara's nephew, where he helped bring in the hay, milk cows by hand and raise chickens. In the midst of the Depression, this was a happy time and fueled his desire to have a farm of his own. He realized this dream in 1969, raising beef cattle for many years. As children, we were often swept up in his numerous projects around the family farm, including maple syrup making and honey bees. Dad always described his farm as an avocation, a change of pace, but first and foremost he was a physician. He also occasionally told us stories of his adventures as a young man, including working as a waiter on the steamships (Manitoulin, Assiniboia) that toured Georgian Bay every summer, while he took correspondence courses to complete his BA; his experiences as an ordinary seaman on the Tribal-class destroyer HMCS Nootka with the University Naval Training Division based in Halifax; and the summer he travelled out West by rail, taking float planes and boats to provide medical care to Indigenous communities in Northern BC. Dad enjoyed skiing, fishing, oil painting and carpentry, building a wooden boat in the basement of our first home on Albert Street (a Hill Street home followed) and then dismantling and reassembling it for use at the family cottage on Big Gull Lake. He was also an early adopter of computer technology in the 1980s, which continued throughout his lifetime, culminating in his online trading pursuits in later years. Dad was a kind, generous, soft-spoken man who gave his children and grandchild unconditional support during times of adversity, and embraced life and big ideas. He was well loved as a husband, father and Grampa. We will miss him dearly.

Memorial donations can be made to the Heart and Stroke Foundation of Canada in Bob’s memory.

A service summary is not available